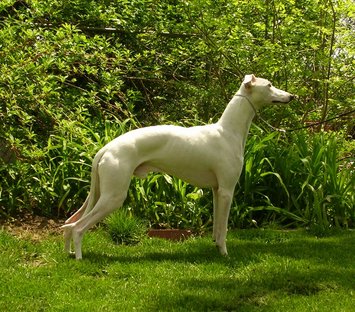 This is Buzz, MeLan SaeSi Tattoo You. Buzz is the keeper from our Thanksgiving '05 litter. He's a very easygoing guy, as are both his parents. Buzz has competed in conformation and WRA racing, but his funky ear keeps him out of the ring these days. His desire to only run on the right side of the track keeps him from competing, but he still loves to run the lure at practice. Maybe someday he'll try oval racing. If nothing else it will teach him to turn left!


When we show our dogs, that's for us. When they race, that's for them. They stand up and start getting excited a half mile from the race location. There's nothing better than letting them stretch their legs and chase the "bunny." At the end of the day, they're blissfully tired. I'm just regular tired. 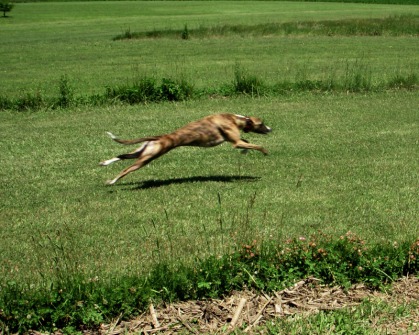 Here's Graffiti, SaeSi Talk On the Wall at MeLan, born October 7, 2007. He arrived here December 1, 2007. Graffiti is part of the SaeSi "Talk" litter and he sure does! Graffiti's pedigree gave us high hopes for success on the track, but before he turned a year old he tore his anterior cruciate ligament and ended up having surgery. He has healed beautifully (thank you Dr. Wikert of Harris Pet Hospital in Paddock Lake, Wisconsin) but since we don't ever want to go through that ordeal again, he will run for fun but not compete. 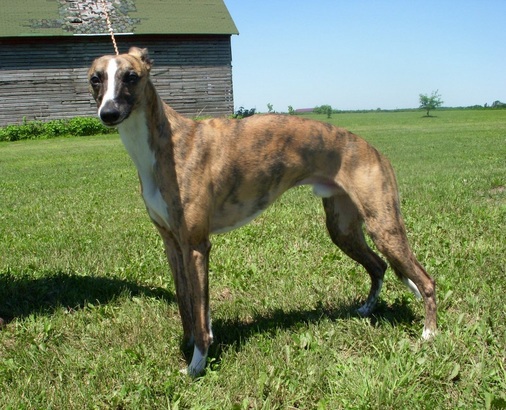 Such a handsome boy.