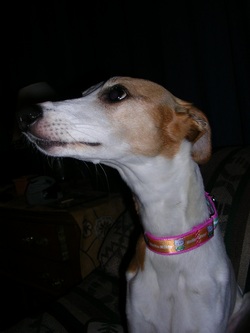 This is Hayley, our first whippet. She was born in 1996 and we got her when she was just over a year old. She was our wild child!  Even in her golden years she ruled the house. Hayley came into the world as a result of a clueless breeder trying to go into the puppy business and went from the frying pan into the fire. Her owners said she didn't like to be crated, so they confined her in the bathroom. She remodeled it for them. (As a result, the tips of her canine teeth were broken off--that was some remodeling job!) When the people divorced, neither of them wanted her and took her to the vet to be put down. The vet instead sent her to a foster home and we heard about her shortly after. Mike and I drove through the aftermath of a snowstorm with downed power lines everywhere to pick her up. She bounced into the house, bounced on and off every piece of furniture till she found the most comfy one, and settled into her new place. Crate training was a matter of treats and common sense. We had to let her go in April '11, at nearly 15 years old. 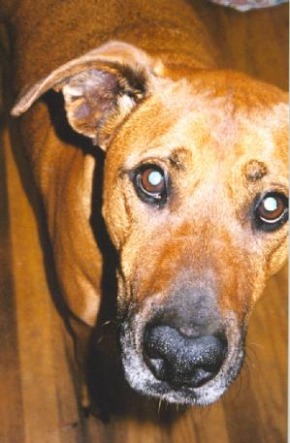 This is Otto the Boxermutt. We got him when Sly, our greyhound, was five years old but acting much older. Otto was relentless in  his attempts to play with Sly, who was definitely not interested...for about a week. Then he must have decided "if you can't beat 'em, join 'em" and the games went on for another five years.

Otto was an incredible asset to our family. He rarely barked, and only when a strange man approached the house. He has stood patiently while little girls laid Barbie clothes along his back. His neutered-uncle status made him the perfect backyard protector for a little whippet girl in season. He got along with other dogs, although they tend to be a bit intimidated at first. (He weighed in at about 85 lbs.and had the Boxer exuberance.)

Otto left us with a hole in our hearts and home on June 1, 2006. He would have turned 14 at the end of the month.  I had been telling our kids for three years that he probably won't be with us much longer. They didn't believe me. He lived for another two years after having mast cell tumor removed and he had little-old-man-rear, but he defied the odds. We will always miss his solid, gentle presence. 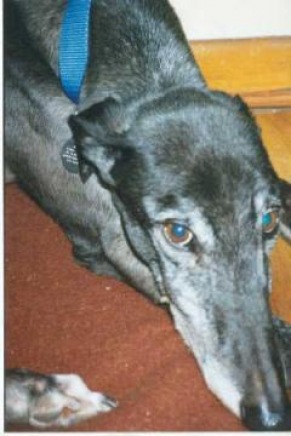 This is Sly, our NGA greyhound. (Get it? Sly and the Family Stone...) As soon as we bought our own house (1986), my first priority was to get a dog. After reading an article in Dog World about greyhound rescue, I wrote to one of the organizations, they put me in touch with another organization, and soon Mike and I were driving to Iowa to pick up our new 2-year-old. He rode home quietly in the back seat of our little Ford Tempo, very much a gentleman. He introduced us to life with sighthounds right away--we were eating sandwiches as we drove and Sly slowly reached that face with the telescoping neck up to the front seat and gently took the last bite of sandwich out of Mike's hand. We lost him at age 10 and still miss his sweet, affectionate personality. My favorite memory of him is looking out the kitchen window and seeing him all alone in the yard, frolicking in the kiddie pool. When he was done, he stepped out, shook himself, and looked around to make sure no one had seen him behaving in such an undignified manner.